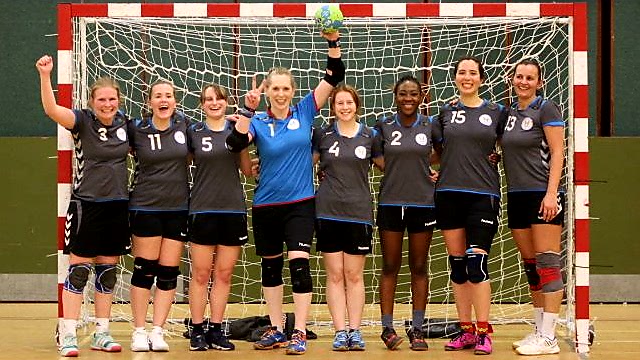 Newcastle Vikings Handball Club’s women’s team ran out clear 28-16 winners over bottom side Leeds Beckett University in Saturday’s English Regional League North encounter at Temple Park Leisure Centre in South Shields.  However, the student side got the better of Newcastle’s men 16-24 in their battle at the foot of the National League North table.

The men’s match was first on court after the morning’s Tyne & Wear County under-16 and under-14 handball trials.  Adam Mobberley pivoted on the line to give the Vikings an early lead before Beckett pulled back.  Centre Julien Eng’s brace and a hat-trick from right-winger Bogdan Ciurea kept Newcastle in touch, but while further back-court strikes came from half players David Topacho and Stephan Stricker it was the visitors who took a 8-11 advantage into the half-time break.

Another Eng double sandwiched Ciurea’s fourth as Newcastle looked to battle their way back into the match, but in defence the Vikings were frustratingly unable to prevent Beckett from breaking through to stretch their lead despite a man-of-the-match showing from goalkeeper Daniel Walsh between the posts.  Captain Topacho and Stricker also each struck again before player-coach Mark Harrison, making a rare outfield appearance, intercepted for a breakaway goal.  Eng and Topacho rounded off the home side’s scoring, but the Vikings were left to rue a series of two-minute suspensions that had helped the students pull away and by the final whistle it was Leeds Beckett who took away the 16-24 victory to leave a winless Newcastle propping up the table.

The Vikings ladies then took the court looking for a big win to narrow their goal difference gap with the University of Leeds at the top of the women’s league table ahead of their clash next month.  Usual winger Marie Brevet quickly took the opportunity of playing in the half position to get them off to the perfect start, soon followed by back-court strikes from captain Alina Inta either side of one from winger Krystina Coulson in her first game of the season.

A topsy-turvy first half saw the two teams continually vie for the lead.  New half-player Ingvild Misund and line-player Maria Jose Gonzalez each struck their first Vikings goals, with Inta’s penalty and a double from head coach Marlen Slinning Goulty helping to edge Newcastle 9-8 in front at half-time.

The second half, however, saw the Vikings gradually open up a strong advantage.  Inta and Goulty struck in quick succession before Brevet added four more to her tally, with Gonzalez and Coulson also each scoring again.  Leeds Beckett changed their tactics to try to mark the Newcastle captain out of the game, but Inta’s power and precision from the penalty line helped her to a further three goals, while centre Goulty also broke through Beckett’s defence line for three more of her own.  Brevet’s breakaway brace took her to seven for the game, Gonzalez pivoted to strike her third, and the victory was wrapped up by player-of-the-match Inta’s eighth and Goulty’s seventh.

With Liverpool avenging last month’s defeat to Manchester to jump to the top, the Vikings’ 28-16 result places Newcastle’s women just one point behind the Merseysiders and level on points with the University of Leeds who hold a 10-better goal difference.  The Vikings now face both of the top sides next month in what look set to be two tough end-of-season title deciding matches as the league goes down to the wire.  Come and support them in their crunch home match against the University of Leeds at Temple Park on 14th April (11am throw-off), ahead of the Vikings men’s last game of the season against Deva, before Newcastle’s ladies travel to Liverpool a week later.