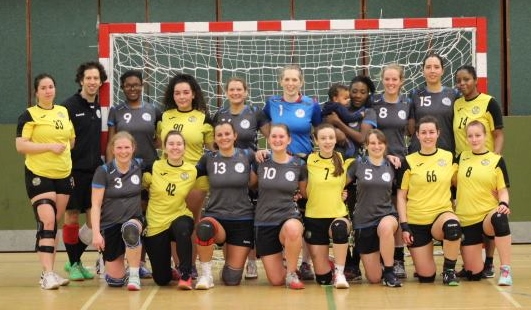 Newcastle Vikings’ women completed a first season double victory over Manchester Handball Club with a 21-14 win in Saturday’s home Regional League North fixture to take them level on points with Liverpool at the top of the league.  However, it was the visitors who sealed the double 13-27 in the men’s National League North match, before Newcastle’s men picked up a welcome first win of the season defeating York Hunters 24-20 in the North East League.

The men were first on court at South Shields’ Temple Park Leisure Centre against a strong Manchester first team.  Newcastle fought well with some solid defensive play backed up by some great first half saves from goalkeeper Daniel Walsh, and by half-time were still in with a chance at 8-13 down.  However, they struggled to find the net in the second half as Manchester pulled away for a convincing 13-27 win.

Julien Eng top-scored for the Vikings with five goals, with fellow back-court players Cedric Le Lay, Etienne Lisse and captain David Topacho also getting on the scoresheet, together with line-player Adam Mobberley and a hat-trick from winger Matthew Lamb.

In a low-scoring first half of the women’s game, dominated by tight defence lines and some great saves from both goalkeepers, Manchester took an early lead before right-winger Katerina Gibson equalised with her first senior Vikings goal.  The away side opened up a two-goal advantage, but half-backs Alina Inta with two and one each from Marlen Slinning Goulty and Emily Bjerk kept Newcastle in touching distance, before the Vikings took advantage of a Manchester two-minute suspension to draw level 7-7 at half-time through winger Marie Brevet and centre Maren Liane.

Blessing Ogbee fired Newcastle ahead from the right-wing at the start of the second half, before the Vikings’ back-court players took control to stretch their advantage with some pin-point shooting from distance.  Inta’s treble saw her pass 100 league and cup goals for the club, while Liane also added three more to her tally and Bjerk another, with goalkeeper Andrea King pulling off a series of double saves at the other end.  Captain Sandra Christke got in on the act with a hat-trick for herself from the line position and Brevet added her second, before another double from Liane rounded off a well-fought 21-14 win.

Newcastle then gave a run-out to several less-regular players in their opening friendly North East League fixture of the season, coming away with a morale-boosting victory.  York Hunters had raced into an early lead before the Vikings pulled back to go into the break 12-10 in front, a scoreline that was matched in the second half as Newcastle ran out 24-20 winners.