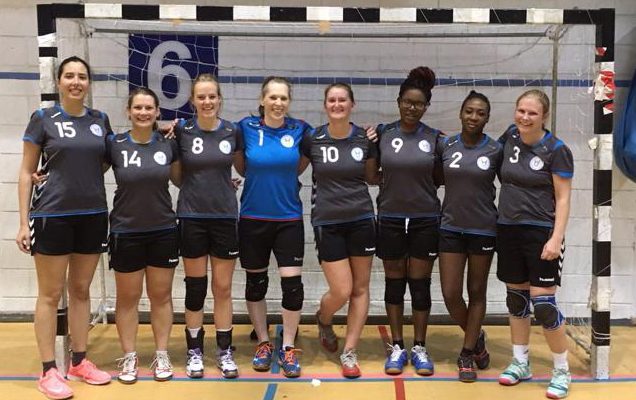 It proved to be a disappointing weekend for Newcastle Vikings’ men’s and women’s teams as they both slumped to away league defeats.

Saturday’s women’s Regional League North match saw Newcastle’s women looking to extend their lead at the top of the table as they took on the University of Leeds in Bradford.  However, despite a battling defensive performance, the Vikings ladies struggled with their shooting accuracy in trying to find a way past the students’ own solid backline.  The University of Leeds edged the first half 7-4, but as the Tynesiders tried to fight back in the second half the home side countered and went on to win 16-9.

Winger Blessing Ogbee top-scored for Newcastle with three goals, while centre Maren Liane and half-back Marlen Slinning Goulty picked up a brace each.  Captain Sandra Christke also scored from the back-court, with Marie Brevet adding one from the other wing.

The Vikings men then had the long trip to Wrexham in North Wales to take on Deva in their National League North fixture on Sunday.  Back-court players Cedric Le Lay with five debut goals and Julien Eng with four strikes dominated Newcastle’s scoring throughout the first half as the Vikings started well and opened up an early 7-4 lead.  However, Newcastle then lost their way as the home side found their form and charged back to take a 21-9 advantage into the break.

Etienne Lisse picked up a treble early in the second half, but despite further back-court strikes from Eng, Le Lay and captain David Topacho, with wingers Robert Thompson and Fedi Boussema grabbing their first goals of the season, it proved to be too much to ask for the Vikings to pull the game back.  Deva went on to claim a resounding 41-17 victory, leaving Newcastle rooted to the bottom of the table.

The Vikings men will be looking to perform much better and avenge their recent league defeat as they play Manchester I in the first round of the England Handball National Cup next weekend.