Newcastle Vikings Men’s Development team took on Durham University in a friendly match at Percy Hedley Sports Academy on Wednesday 4th March. Both teams had players who had recently started playing handball and were very new to the game. They all picked up the game quickly and got into the speed of the game really well. Both teams fielded a strong defence, winning several turn-overs ending in fast-break goals in the first half.
At half time the Vikings just had the edge at 11-10. In the second half Durham Uni started off the strongest but the Vikings lads picked up the intensity and went head to head with Durham for the rest of the game. The match ended 18-18 after some frantic exchanges in the last few minutes to try and force a winner.

The Vikings would like to thank Durham for coming up and giving them a hard but enjoyable match and look forward to the next one. The next development match for our Vikings men’s team is on the 22nd March against York Hunters in York.
If you would like to join our men’s or women’s development sessions please get in touch with us at info@newcastlehandball.co.uk or come down to Temple Park on a Monday night or at Percy Hedley on a Wednesday night. 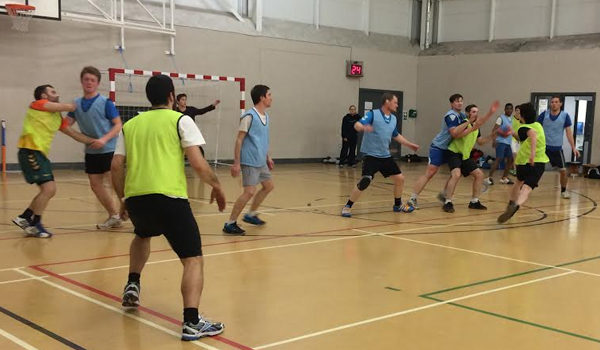