As Newcastle Vikings Handball Club prepare for a new season in England Handball’s expanded North West Regional Development League, they returned to Scotland on Saturday 20 September to take part in Edinburgh Handball Club’s pre-season tournament and renew acquaintances with many of the teams they faced last season.
In positive mood following their success in May’s Tyneside tournament, Newcastle’s women opened with another close-fought 5-3 victory over Edinburgh.  Viking’s men were slower to get into their opening group match, going down 2-12 to Edinburgh.
A nail-biting 8-9 defeat for our women to a mixed Dundee/EK82/Glasgow team was soon following by a rousing 13-4 victory over St. Andrew’s University, before another close defeat 6-8 to guest Norwegian side Gulset/Heerkules. 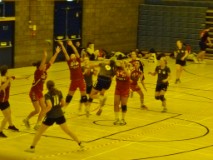 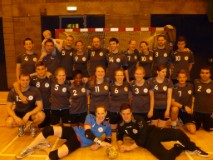 Meanwhile our men’s team battled hard against guest French team Paris St. Germain before going down 4-8.  A great performance saw the Vikings build a 3-1 lead in their next match against EK82 before the East Kilbride team fought back to agonisingly take the game 4-3.  Another 4-8 scoreline against Dundee University saw them face a play-off against a York, the 5th-placed team from the other men’s group.

With the York side sporting several Newcastle players as guests to boost their numbers, the play-off was certainly a friendly affair as Newcastle finished with a moral-boosting 10-4 victory over York’s ‘Jorvik Vikings’.  Last season’s league champions Tryst took the men’s tournament honours.

Finishing 3rd in the women’s group, Newcastle faced a re-match against the 2nd-placed Dundee/EK82/Glasgow mixed team to see who would win through to the final.  This time though the Vikings gained revenge for their group defeat with a strong 8-5 victory.  Another good performance against Gulset/Heerkules in the women’s final saw Newcastle pull back to level at 5-5 before the Norwegian team took the spoils 7-5 to lift the tournament trophy.

A fun time was had by all and it was also a good opportunity for several new Vikings players to get their hand in and gel with their new team mates ahead of the new season.